“At last, in a world torn by the hatred and wars of men, appears a woman to whom the problems and feats of men are mere child’s play. A woman whose identity is known to none, but whose sensational feats are outstanding in a fast-moving world. With a hundred times the agility and strength of our best male athletes and strongest wrestlers, she appears as though from nowhere to avenge an injustice or right a wrong! As lovely as Aphrodite- as wise as Athena- with the speed of mercury and the strength of Hercules – She is known only as Wonder Woman, but who she is, or whence she came from, nobody knows!”

The Origin of Queen Hippolyta’s Daughter

Diana is the daughter of Queen Hippolyta, the first born on Paradise Island in its three thousand year history that the immortal Amazons inhabited it. The Amazons had been created when the Greek goddesses retrieved the souls of all the women who had been murdered by men and settled them on the island. However, one soul in particular was restrained from creation, the soul that would be born as Diana. Hippolyta was informed to mold some clay from the shores of Paradise Island into the shape of a baby girl, thereafter six members of the Greek Pantheon then bound the soul to the clay, bestowing it life. In addition, each one of the six allowed Diana a gift: Demeter, great strength; Athena, wisdom and courage; Artemis, a hunter’s heart and an affinity with animals; Aphrodite, beauty and a loving heart; Hestia, sisterhood with fire; Hermes, speed and the power of flight. Diana was raised enveloped in a legion of sisters and mothers.

When she was an adolescent, the gods declared that the Amazons must dispatch an emissary into Man’s World. Queen Hippolyta commanded for a contest to be held, yet prohibited Diana from competing. Diana defied her and did so in disguise, succeeding in the contest without difficulty and being named the Amazon’s champion.

Wonder Woman is provided a new origin by writer Brian Azzarello and artist Cliff Chiang, who present us with a reinvention of the character, full of Greek mythology. In the initial myth, Princess Diana was born from clay for it was her mother Hippolyta’s desire to have a daughter. However, in 2011 DC Comics remade its whole universe and brought us this new run, Wonder Woman #52, describing how the clay origin story was just a deception created by Hippolyta to hide an affair she had with Zeus, and that is how Diana was born.

Therefore, our heroine is a demigod, daughter of Zeus, placing her shoulder to shoulder with Olympus’ highest gods, which as a result provides a new run with more Greek mythology than ever. As an American comic the majority of Wonder Woman readers have been raised in an occidental religious background, and within this kind of belief, God and all that is divine is intrinsically good. For that reason, occasionally these readers do not comprehend why the Greek gods behave the way they do, such as haphazardly bestowing superpowers to humans to hysterically murdering mortals. Diana has had to attend to malicious gods and at times even fight battles against them herself, as seen in past runs. However, she always returns to her temple at Themyscira and worships them. Why is this?

Firstly, the majority of the characters in the Wonder Woman comic are deities, and that primarily one has to comprehend that Greek gods are not extremely powerful humans, but concepts with consciousness. For instance, Ares, the god of war, is the concept of war itself and in fact during the whole of the story, the gods are referred to as the name of the idea they symbolise, such as Ares is called “War”, Hades is called “Hell”, and Poseidon is called “Sea”, after all that is their true essence.

“(She) encourages women to stand up for themselves, to learn to fight, and be strong, so they don’t have to be scared, or depend on men”.
William Moulton Marston (Creator)

At the inception of this narrative Zeus is missing, in that he plainly seized to exist. Zeus is the representation of totalitarian power. Power can be favourable: he is the ruler of Olympus and sets, or forces, everything and everyone in their proper place, allowing the world to spin in a considerably organised fashion. Although, extreme power can in turn be maddening. Zeus has accomplished some terrible deeds, for instance, the murder of his son on account of removing competitors to the throne. His authority evolves while the subject’s recognised worthiness in society declines – however his authority was quite extensive even in the beginning. The King of the skies persecuted mortal women in the most unjustifiable games which frequently ended in their rape. Therefore removing this powerful figure from the scene is extremely intriguing. How will the universe adjust to this unique situation?

And that leads us to Hera, wife of Zeus and in theory the one next in the succession line. Hera is the goddess of marriage and nevertheless, she does not take her husband’s adulterous affairs delicately, like hunting for Zeus’ illegitimate children and viciously disposes of them, along with their mothers. Therefore she is featured as the master villain in this narrative, after all this is Greek mythology and nothing is as simple as that.

The Many Illegitimate Children of Zeus

Diana eventually discovers that she is Zeus’ illegitimate daughter, a demi-goddess. With this new revelation she also realises she is not the only one. The King of Olympus lusted after mortal women, and with his shape-shifting abilities seducing them was no challenge. As expected Hera tries her best to exterminate them all, this however was not always a possibility, for they were demigods and while some possessed powers that protected them from her, the others were kept from danger by Zeus. In their mutual fear and loathing for Hera the children bonded and Wonder Woman meets some of her half-brothers and half-sisters. While none of Diana’s actual siblings were drawn from Greek mythology, there is a lot of inspiration for their characters from the old tales, which Azzarello and Chiang (the writer and artist) could have adopted. While Hera demands the death of Zeus’ illegitimate children, Olympus’ throne is unoccupied and more issues start to arise. Zeus’s brothers and other supreme candidates devise plans to seize the throne for themselves. 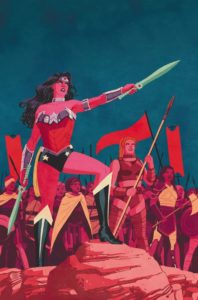 The Battle for Womanhood

Wonder Woman and her sister Amazons have to wear heavy bracelets as a reminder of what can come to pass if women let themselves be conquered by men. In the past, the Amazons had surrendered to the enchantment of some attractive Greeks plunging them into chaos. The Greeks put them in chains, beat them, and made them work like beasts in the fields. Aphrodite ultimately liberated these disheartened girls, however, she established a rule that the women must never submit to a man no matter the reason.

In a subsequent adaptation, Athena is the patron of the Amazons, creating them as warrior people to resist Ares’s army. Even though none of this was retained in the new #52 reintroduction, the present Themiscyra appears to be similar to the second adaptation, a community to enhance fighting abilities, not science. One aspect was however agreed upon in the older adaptations: Ares was the antagonist. That will never be the case again.

The God of War in Wonder Woman

The clay origin story was not the only daring adjustment. Ares is the God of War and obtains strength when there is strife in the world, while Athena too is a Goddess of War she only concedes to fighting when it is wise and for justice. However, Ares is presented both in mythology and in the Wonder Woman Golden Age comics as truly bloodthirsty. Ares was Wonder Woman’s arch-nemesis and desired the entire world in a state of deep hatred and bloodshed. Aphrodite, the Goddess of Love, dreading the success of War, conceived the Amazons establishing them as her loyal followers and to confer Aphrodite’s Way. Nevertheless, as it happens oftentimes in comics, there are disagreements.

In Wonder Woman #0, an inexperienced Diana was ambitious to learn about combat. While walking among the forests of Themiscyra, she runs into an outlandish figure: War himself. From that moment on, Ares and Diana started to train every night in secret. Her mentor taught her all that he knew, and in no time at all she became the most excellent warrior on Paradise Island. The pair departed ways when Diana refused to slaughter the Minotaur because she felt sorry for the beast. Aside from their ideological differences, they nonetheless cared for each other years thereafter, indeed Ares addresses Diana as “little one”. The new Wonder Woman’s patron is War, the one that is a symbol of “manly courage”. Undoubtedly this may be seen as blasphemy, yet Diana is more than capable of harking back this irony to her benefit and challenges the labels of “masculinity” through her achievements.

In any case, the new Ares acquires a diverse appearance, illustrated as an aged man with deep-seated holes instead of eyes, a lengthy beard and blood-stained clothes; as opposed to the usual muscular, provocative god. Once more this new adaptation amazes with its unique character designs. The lone remaining symbol is Ares’ helmet, molded in the style of Spartan warriors. This God of War is morose and resentful, allegedly portraying the real concept of war.

A Reinterpretation of the Mythos

Chiang’s visual reinterpretation of the mythos demonstrates contemporary ideas. War has transformed entirely from the days of classical antiquity to the 21st century, just as his godly brothers and sisters. An armored muscular warrior lusting for blood does not relate anymore, nevertheless, the concept of War itself is far from dead. Chiang’s comic illustration of Ares presents a contemporary War, who drowns his mind in alcohol in order to forget all of that he has seen.

Never is Greek mythology black and white, which is why it makes Wonder Woman superior compared to Superman’s moral and physical perfection or Batman’s “bad just because they are bad” villains. Diana acknowledges and comprehends that provided the Sea is guilty of something bad at times, it likewise gives life. The Sea, being like all the other gods, is what it is, neither good nor bad yet glorious, and that is why she still returns to her temple on Themiscyra in worship of the same gods she fights against, that is why she still prays. 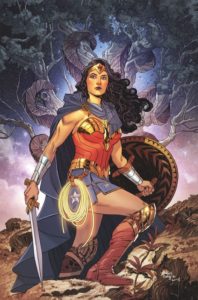