The Olympian Gods are some of the most well-known deities of Western mythology, however they did not hold power over the universe since the beginning of time. According to Greek mythology there were three generations of deities. First, the primordial beings were in power, entities like Gaea, Uranus, Nyx, and others. After, came the Titans, who were children of Gaea (Earth) and Uranus (Sky). There were many Titans but it was Cronus, who took charge and, with the help of his mother, overthrew Uranus, taking power and becoming ruler of the universe. Uranus predicted that Cronus would also be overthrown by his son, which led to Cronus swallowing his children whole. His wife, Rhea, was not pleased with this and when her youngest son, Zeus, was born she tricked Cronus and gave him a rock to swallow instead of her son.

Zeus eventually grew up and he tricked his father into regurgitating his siblings, who were still alive in the Titan’s stomach. Zeus led a revolt against the Titans, starting a war that lasted for ten years between the Gods and Titans, a war which we call the Titanomachy. Eventually the Olympians won, with the help of the Cyclops, Hecatonchires, and Themis, Prometheus, and Epimetheus, the only Titans to fight on the side of the Olympians. The victory of the Olympians over the Titans sparked a new era, what was called the Silver Age of Man.

Prometheus and Epimetheus were tasked with creation, Epimetheus (Hindsight) squandered all the gifts he had on animals and plants so Prometheus (Foresight) fashioned man out of clay, making him stand upright as only the Gods had done before. Athena breathed life into the clay figure and thus, Man was created. 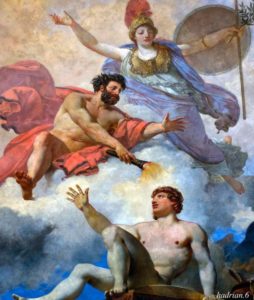 The Rivalry between Zeus and Prometheus.

Zeus demanded that man give the Gods sacrifice and Prometheus tricked Zeus, to the benefit of Mankind. He created two piles, one of bones wrapped in fat and the other with tender meat hidden in the hide, and Zeus, supposedly aware that he was being tricked chose the pile of fat and bones, dictating what portion of food Man was to offer the Gods. Zeus was so infuriated by Prometheus’ trickery that he punished him by taking fire away from mankind. However, Prometheus, ever our champion, stole fire back from the Gods and brought it to man hidden in a hollow fennel stalk.

When Zeus saw that Prometheus had given fire back to man, he worked with Hephaestus to create a creature of stunning and absolute beauty, Pandora, the first woman. Pandora was given gifts by Hermes and Aphrodite in order to make her irresistible, and she was sent to Earth as a gift for Epimetheus. Prometheus warned Epimetheus not to accept any gifts from Zeus, however, Epimetheus ignored those warnings and accepted Pandora. With Pandora, Zeus had sent down a jar filled with evil, which Pandora herself opened unleashing the evil upon mankind. Only Hope remained behind, a comfort and blessing to ease the pain that had been unleashed by Pandora. 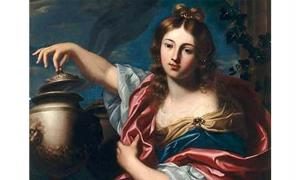 Prometheus had to suffer punishment once more because of his rivalry with Zeus. There was a prophecy that should Zeus father a son with Thetis, he would grow to overthrow his father, just like Zeus himself had done to Cronus, and Cronus before him to Uranus. Prometheus knew the prophecy, however, he refused to tell Zeus about it. This angered Zeus immensely, and Zeus is not known as a merciful god. Zeus had Prometheus bound with chains and strapped to a mountain with a wooden stake through his midriff. There, Prometheus would stay as every morning a giant eagle would fly to him and peck at his liver, which would heal during the night only to be devoured once again. Prometheus’ torment ended with an arrow shot from Herakles’ bow when Prometheus and Zeus finally reconciled, the prophecy having been averted. 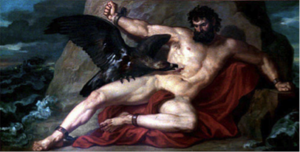 As time went on Zeus grew tired with the wickedness of man. He visited Lycaon, king of Arcadia, to test humanity. However, Lycaon tried to feed the God his son earning Zeus’s wrath. Zeus unleashed a great flood that no man or animal would survive, except two. Deucalion, son of Prometheus, and his wife, Pyrrha were good and pious people and the gods decided that they must survive to repopulate the earth. So Prometheus warned his son about the upcoming flood and Deucalion built an ark to house him and his wife.

When the disaster struck, Deucalion and Pyrrha parked the ark safely on Mount Parnassos. They called to Themis, hoping she might be able to tell them how they might rebuild the earth. The Titan told them to toss the mother’s bones behind them, they understood this to mean Gaea’s (Mother Earth) bones. So they both picked up rocks and tossed them over their shoulders onto the earth. The stones thrown by Deucalion became men, among them Hellen, the progenitor of all true Greeks (Hellenes), and those thrown by Pyrrha became women, thus repopulating the earth.

Prometheus and his descendants are intricately linked with the progress and development of Man in Greek myths. Prometheus can be interpreted as a guideline for humanity, teaching us to always keep in mind how our actions will affect our futures.