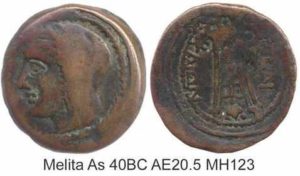 Maltese MELITAION coin with the veiled head of Persephone (obverse) and the tripod bearing the word MELITAION (reverse). MELITAION means “of the Maltese” or “belonging to the Maltese”.

Thrinaks – The Tripod and the Islands of Malta and Gozo by Profs. Horatio Caesar Vella

The Malta Classics Association’s Logo is reminiscent of Roman coinage with representations from Greek mythology. On a number of coins we have the figure of Persephone on one side, and the representation of our Logo on the other. The two figures are intrinsically connected.

Persephone was the daughter of Demeter, goddess of fertility, who came to be associated with death. As a compromise with her mother, Hades, god of the Underworld, contented himself with keeping Persephone, his wife, whom he had stolen from Earth, for only six months of the year. This myth explains why Earth is fertile generally for only half a year. Because of her connection with death, the Romans represented Persephone on the Maltese coins as veiled.

The tripod, called in Greek “Thrinax”, was a three-legged stool, with a hole or holes in the seat, that was placed over a hole in the earth commonly believed to be the omphalos of the world. Through this hole in Mother-Earth, generally imagined to be a “primeval hill” representing the pregnant earth, came the inspiration which passed through the hole or holes of this tripod into the skirt of the priestess, Pythia, sitting on it. She, in turn, interpreted the inspiration she received from the earth in enigmatic poetry.

Apollo, the twin-brother of the moon-goddess, came to be connected with this tripod and the Pythia, because he had usurped that supremacy of the locality from Python, the “primeval serpent” or dragon (it is the same in Greek), who protects Mother-Earth and all entrances into the Underworld. This serpent was thought to be the ideal creature for this guardianship because, like Persephone, he shared life with both the living and the dead since he lived on both levels, and was therefore cognizant of things above the ground and of other mysterious things hidden from man, as hinted in the account of the Genesis.

The Virgin Moon-Goddess was also connected with death. Both her waning phases and her short absence from the sky within the lunar month, as well as her almost daily sinking into the western horizon, associated with death, where Oceanus was imagined to flow out, helped to associate her with death. Apollo’s sister received various names in Greek, such as Selene and Phoebe. Selene was the sister of Helius and, therefore, aunt of another Phoebe. Later on, even Artemis herself was to receive that name as an epithet, as her twin-brother was to receive that of Phoebus. Artemis was the daughter of Zeus and Leto, and Leto the daughter of Coeus and Phoebe, brother and sister, husband and wife, two of the twelve Titan gods, children of Uranus and Ge. This means that Artemis was a second cousin of Phaethon, Phaethusa, Lampetia and Phoebe. This last Phoebe, the nymph Homer does not mention, was Thrinacia herself, the Moon-Goddess venerated in the last of Odysseus’ landfall before he came to Ogygia.

Death was also associated with fertility. Since the dead were thought to go down into the Underworld, then Mother-Earth received its fertility precisely from the Underworld. Hence the connection of fertility with Thrinax, Persephone, Apollo and Artemis. A Roman coin minted also in Malta represents a figure holding a trident. Such an instrument was called in Greek precisely “Thrinax”, and it was used in connexion with the threshing of corn. This trident was therefore associated with Demeter, goddess of fertility, mother of Persephone, who, as said above, tied up the lives both of the Underworld and of the Earth. Among his other attributes, Apollo was the god of help and healing, the protector of flocks and cattle, the god of the Sun that gives light and energy to all things which grow. Similarly, Artemis, the moon-goddess, averted evil and cured the suffering of mortals; she protected the young, the flocks and the chase. She was also the goddess of child-birth in as much as the child passed from darkness into light (Dea Lucina for the Romans) and of night activities in as much as she was the chief illuminator at night. As a hunting goddess during night, she became associated with the snake, the reptile who seeks its prey at night. As such, she becomes identifiable with the Cretan Potnia Thērōn who holds the snakes in her hands. As a moon-goddess, she is often, like Persephone, represented with a veil over her head.

Thrinacia was also the lonely island South of Scylla and Charybis, identifiable with the islands of the Maltese archipelago. Malta has its name derived from Melite, one of the 50 daughters of Nereus and Doris. Both Melite and Thrinacia, daughter of Helius, were granddaughters of Oceanus, the river that poured into Death in the West. Malta and Gozo were the “sacred islands” of the Mother-Earth goddess of fertility in prehistoric times, connected with the dead below, while Malta, Gozo and Comino represent the triple dimensions of an archipelago, formerly referred to by the name of “Thrinacia”, the moon-goddess of the “triple” phases of the moon. This name has the same root as in Thrinax, the representation of the Malta Classics Association’s Logo,  the three-legged stool which was used in connection with all the elements just discussed, namely, the Underworld and its Queen of the Dead, Persephone, as well as Apollo, Python, the snake-dragon he defeated, and Artemis, the Moon-Goddess.