Human beings, as a race, have always been both fascinated and frightened by what comes after death. So far, no one can agree, some adamantly believe that there is nothing after death, while others believe that an eternity of ecstasy or torment awaits them after departing this Earth. The ancient Greeks had their own ideas of the afterlife: after they died they would enter the realm of the Underworld.

On instinct, one might assume that the Underworld meant Hell. This has to do with our culture which has been heavily influenced by Christianity, which implies that Hell is subterranean whereas Heaven, is the realm above the skies. The ancient Greeks, however, had no such notions, the Underworld was the place for all the dead; good or evil.

The Journey Through the Underworld

To reach the soul’s final resting place it had to first traverse the underworld. Charon, the ferryman of the underworld, was charged with moving souls from one end of the river Styx (or Acheron, sources differ), to the other. However, before accepting any soul onto his ragged ferry, they were required to pay him a small coin as fare. This fare needed to be placed in the mouth of the dead upon burial, otherwise, without giving Charon his toll, they would be stranded for a century on the bank of the river. Cerberus, the three-headed hound of Hades, stood guard on the opposing bank of the river; Allowing souls in, but never out again. 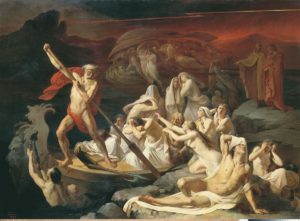 Once the dead crossed the river, they would stand in front of a panel of three judges; Minos, who decided the most difficult cases, Rhadamantus, who judged the Asiatics and was Lord of Elysium, and Aeacus, the guardian of Hades’ keys and judge of the Europeans. The three judges would sit at a place where three roads met and after judgement a soul would be sent down its rightful path, to arrive at where they would be spending all of eternity.

One of the paths leads to the Fields of Asphodel. Here souls who lead unremarkable lives would roam and wander for eternity, the name comes from a white flower, representing the pale imitation that these fields have when compared to life.

Another path leads to the depths of Tartarus, which is surrounded by Phlegethon, the river of fire. This is where souls who have been condemned to eternal damnation would stay. They suffered terrible punishments, such as those of Sisyphus, Tantalus, and Ixion. Each resident of Tartarus would have their own specific punishment, given according to the misdeeds and sins of their lives. Tartarus also served as a prison for the usurped Titans after their war with the Olympians.

The final path leads to the beautiful Elysium. Originally Elysium was exclusive to heroes which the Gods had made immortal but it eventually evolved into a land of perpetual spring, where people who had done remarkable good in their lives would roam. Within Elysium lies the Isle of the Blessed, where souls who had been reborn three times, and achieved Elysium all three times would spend the rest of eternity. Elysium was separated from the rest of the Underworld by the river Lethe, the river of forgetfulness, which souls would drink from to forget their woes before ascending to Elysium.

As the God of the Underworld, Hades was a very powerful God. He not only held dominion over the dead, but also the ground and all the riches beneath it, including gems, semi-precious stones, and minerals. He travelled on a golden chariot driven by four black horses and carried a sceptre that had the power to tear the earth asunder. He also owned a magical helm, fashioned by the Cyclops, that gave him the power to become completely invisible, even in the eyes of the gods. Hades was always considered a solitary, stern god. He did not attempt to keep up with the affairs of the Olympians or mortals. He simply kept to himself and ensured that none of the dead left his dominion, with the help of Cerberus, his three-headed guard dog. 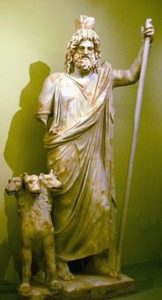 Among his attendants were the Furies (Erinyes), or Kindly ones as they were referred to by the common folk, who were considered to be very fearsome creatures. They heard the prayers of people who had been disrespected, like when a child wrongs an elder, or host wrongs a guest. They were said to haunt their victims relentlessly, following them through cities until their death.

While Hades might not be the most popular of the Gods, he is one of the most important. His duties were tantamount, for if the guilty were not punished and the good not rewarded, death would have been a terribly hopeless phenomenon. Hades and the underworld created hope for those who lived a good life, and those who hoped to see their loved ones again, and he inspired fear in the hearts of those who committed evil.

This information has been presented to you in the hopes that it might clear up some misconceptions about Hades and the Underworld, as well as provide with some background on the spiritual ideas of the ancient Greeks.