Anyone who has seen Disney’s Hercules will remember the sassy and delightfully talented narrators of the film, but the focus is not on the muses themselves so here are a few tidbits of information on each of the muses. 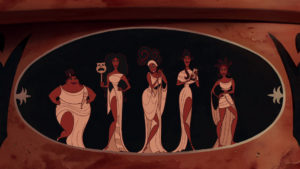 The nine muses were minor goddesses, possessing the gift of prophecy, and patrons of the arts and knowledge. They entertained the major divinities and inspired artists and poets to create beautiful works and make brilliant discoveries. They were the children of the God Zeus and the Titan Mnemosyne (memory).

Calliope – She of the Beautiful Voice

Calliope was the muse of epic poetry, often seen with a writing tablet, scroll, or golden crown. She is often considered the wisest of the muses, also having the ability to play any musical instrument, and it is said that Homer was directly inspired by her. She had two sons, Orpheus and Linus, the first a great musician and the latter was said to be a personification of lamentation. 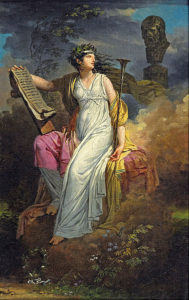 Clio was the muse of history often seen with an open scroll or next to a pile of books. Her name means to make famous or celebrate for she was the one that inspired historians to write about the great events and heroes of the past. 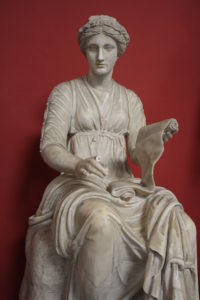 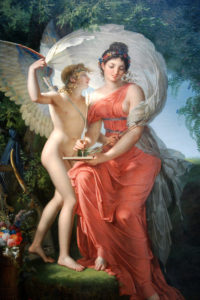 Euterpe was the muse of Music. Music was a very important aspect of Greek life, it was played at wedding ceremonies, funerals, and great games. Euterpe was often seen holding an Aulos, which was an instrument resembling a double- ended flute, or pan pipes. 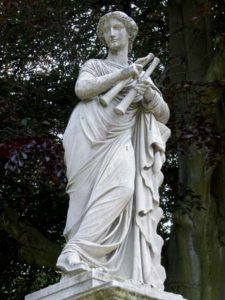 Melpomene – Celebrate with Song and Dance

Melpomene was the muse of tragedy often seen wearing or holding a tragic mask with a sword in hand. She is sometimes seen wearing a wreath of ivy and the traditional boots worn by tragic actors, Cothurnus boots, which had thick soles to elevate themselves. Theatre was the Greeks primary form of entertainment and many of the Classical Greek tragedies have been retold and adapted through the ages, including the modern era. 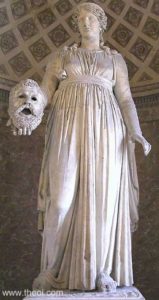 Polyhymnia – She of the Many Hymns

Polyhymnia was the muse of sacred hymns, songs, and dances. She is typically portrayed in a pensive pose, sometimes leaning against a column and sometimes sitting down with a finger to her mouth. She is also associated with thought and her symbol was the veil often worn by maidens. 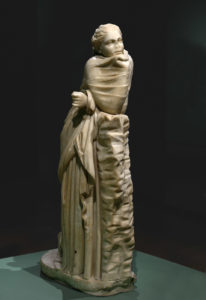 Terpischore was the muse of dance and choral song, which was very important because in Greek theater it was the choir who told the story and not the actors. Her symbol was the lyre and some say that she was the mother of the Sirens, bewitching maidens who held the power to weave beautiful songs. 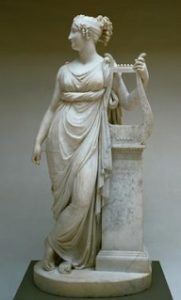 Thalia was the muse of comedy and pastoral poetry, and she is seen holding or wearing a comedic mask and wearing the typical shoes actors wore in comedies, which had thin soles as opposed to those worn in tragedies. She is often seen with Melpomene. 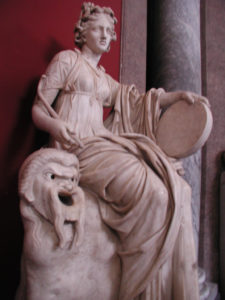 Urania was the muse of astronomy, astronomical writing, and constellations. She is usually depicted wearing a gown made of stars and celestial bodies while pointing at a globe with a rod.  She could read the future by looking at the stars and was thought to be the most philosophical muse. 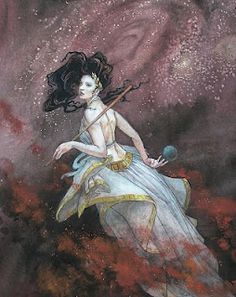