Theseus was the son of Aethra, and grandson of Pittheus, the king of Troezen. It is not entirely certain who sired him, it could have been either Poseidon or Aegeus, King of Athens. Once Aethra was pregnant, Aegeus left for Athens but not before hefting a great boulder and burying his sandals and sword underneath it. He instructed Aethra that she was to tell her son, when he came of age, to lift the boulder and retrieve the objects to prove that he was worthy of being the heir to the throne of Athens.

When Theseus came of age, he easily lifted the boulder and retrieved the objects and so his mother sent him to Athens. Instead of traveling by sea, Theseus chose to take the more dangerous land route. Before reaching Athens, Theseus had to fight six battles during his journey.

The first town he came across was Epidaurus, where Periphetes, son of Hephaestus, roamed and robbed and clubbed travelers to death. His club was said to have been made entirely of bronze. Theseus bested him using both his cunning and his strength. He mocked Periphetes, stating that his club was actually made of wood and only encased in bronze, Periphetes handed Theseus the club so that he would inspect it and see that it was in fact made entirely of bronze. Club in hand, Theseus struck down Periphetes and continued on his journey to Athens, keeping the club as a trophy.

His second encounter was with Sinis, AKA the pine- bender, he earned his name through his preferred method of killing, which involved bending a pine tree and asking passing travelers to help him, then he would unexpectedly let go and they would get flung to their deaths.  Theseus killed him in much the same way, he bent two pine tree and tied SInis’ wrists to each one, then he moved on allowing fatigue and nature to take their course. 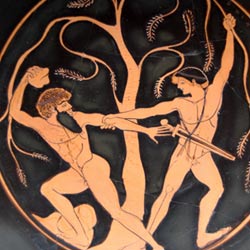 Next Theseus encountered the Crommyonian Sow, which destroyed the lands of a village close to Megara and Corinth by the same name. Theseus killed it earning the gratitude of the villagers who had been too terrified of the sow to even till their fields.

His fourth battle took place along a narrow coast road along a cliff, where the bandit Sciron would lay in wait for passing travelers and force them to wash his feet. As they bent down to fulfill this demand he would kick them, sending them down to the water, where a giant turtle would wait to devour them. Theseus drew his sword when he was approaching Sciron and he looked so intimidating and powerful that Sciron allowed him to pass without trouble. However, Theseus had heard about Sciron and wanted to punish him for his crimes, so he demanded that Sciron wash his feet and when the bandit bent to do so Theseus kicked him off the cliff to bear the same fate as e had forced onto others.

At the kingdom of Eleusis, Theseus came across Cercyon, he would challenge passers-by into a wrestling match and promise his lands to anyone who could defeat him. No one ever did. Cercyon would crush his challengers in his strong arms, until Theseus came along and defeated Cercyon through skill rather than brute strength, thus becoming the inventor of wrestling.

Theseus’ last encounter before reaching Athens was with a man known as Procrustes, who claimed to have a magical bed that could fit anyone perfectly. This, of course, was true but it was slightly more gruesome than he marketed it to be. He would lay traveler on his bed and if they were too short he would tie their hands and feet to opposite ends of the bed and stretch them until they fit. If they were too tall he would simply chop off the overhanging bits. Procrustes, being such a generous host, offered Theseus a bed for the night but instead of falling for the ruse, Theseus challenged Procrustes to fit his own bed and dispatched him in the same manner Procrustes dealt with his guests. 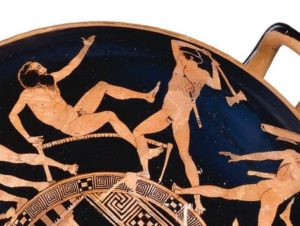 When Theseus finally arrived at Athens, happy to finally meet his father, went to dinner with Aegeus and Medea, who had become his wife. Medea, worried that Theseus would ruin the future of her future offspring as kings, convinced Aegeus to offer him a cup of fragrant wine which had been poisoned. Aegeus had not yet realized that Theseus wore his sandals and bore his sword, but Medea knew who he was. When the roast beef was served, Theseus drew his sword as if to carve it and Aegeus recognized his own blade, upon inspecting his face closely he realized that this man was indeed Aethra’s son. He rushed to embrace him and consequently spilled the poisoned goblet, which landed on a hound, who died almost instantly. Aegeus realized what his wife had tried to do but before he could attempt to punish her she flew off to Asia and Theseus was named heir to the throne of Athens.

Some time after his arrival at Athens, Theseus heard weeping and felt great sorrow come across the city. Wondering what the cause could be, he asked the citizens who replied that Athens was forced to pay a tribute of seven young men and seven beautiful maidens every year to serve as food for the dreaded minotaur. This was to prevent Minos from proclaiming war on Athens since his son had been killed there.

Theseus offered himself as one of the tributes, promising his father that he would kill the minotaur and free Athens from having to pay such a cruel tribute. Aegeus was distraught, he did not want Theseus to die and so Theseus assured him that if he succeeded he would change the sails of the ship from black to white. Aegeus finally relented and Theseus left towards Crete.

The Minotaur was a fierce creature, half man and half bull. He was so terrifying that a massive labyrinth had to be constructed around him so he would not be able to terrorize the people of Crete. The minotaur was born from Minos’ wife, Pasiphae, and the white Cretan bull and brought to fulfillment a curse Poseidon had cast upon Minos.

When the tributes from Athens arrived in front of Minos’ court, Ariadne, one of Minos’ daughters, fell in love with Theseus and as a gift gave him a large ball of string and advised him to tie it to the entrance of the Labyrinth, so that he may find his way out again. Theseus promised Ariadne that he would take her with him to Athens and make her his queen. And so, Theseus was thrown into the labyrinth where he eventually came upon the minotaur and killed it either with one of its own horns or with his bare hands, sources differ. Following the string back to the entrance of the labyrinth, Theseus emerged victorious and boarded the black-sailed ship where Ariadne and the other tributes were waiting. 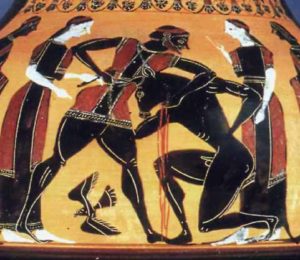 The ship docked upon the island of Naxos to rest before finally reaching Athens, and Theseus and his crew slept and he awoke again he set sail for Athens leaving Ariadne behind. Some say that he did this because the God Dionysus had told him to in a dream, others say he simply tired of her. Either due to sorrow or a curse Ariadne had laid upon him Theseus forgot to change the black sail into a white one and as Aegeus glimpsed the black-sailed ship he threw himself from the Acropolis in despair, giving the name of the Aegean Sea.

Once Theseus arrived once more at Athens and learned of his father’s death he was distraught. He became King, a good King, but he was not satisfied and the sorrow he felt would not diminish, so he set off to look for more adventure in hopes of repenting. He went to the land of the Amazons, where he fell in love with their queen, Hippolyta. He married her and she bore him a son, Hippolytus. The Amazons invaded his city under the guise of rescuing their queen and in the process accidentally killed her.

Time passed and Theseus was still unwed, though his son had grown into a fine young man. Theseus remembered Phaedra, Ariadne’s younger sister, and sent for her hand in marriage. They eventually wed but Phaedra fell in love with Hippolytus instead of the aging Theseus. Hippolytus was an honourable young man and he consistently refused Phaedra’s requests for them to elope.

The saying hell hath no fury like a woman scorned is a perfect description of the upcoming events. Phaedra finally gave up and became enraged that Hippolytus so easily refused her. She devised a plan to ruin him, and so she threw herself at him and he drew his sword in anger before discarding it and running off into the woods. Phaedra went to Theseus and accused his son of trying to force himself on her. Theseus refused to believe this until he saw his son’s discarded weapon. He then beseeched the god Poseidon to kill his son for his crimes.

Poseidon obliged and sent a wicked sea monster which frightened Hippolytus’ steads, and tangled him in the reigns, tearing him limb from limb. Phaedra was distraught for she never meant for Hippolytus to die and she confessed her sin to Theseus and kills herself. Theseus was beside himself with grief, he gave his son the proper burial rites and refused to do the same for Phaedra.

This story is told wonderfully in a tragedy written by Seneca the Younger, below is an excerpt from the Phaedra, a lamentation by the Chorus on Fate’s cruel ways.

“Fate without order rules the affairs of men, scatters her gifts with unseeing hand, fostering the worse; dire lust prevails against pure men, and crime sits regnant in the lofty palace. The rabble rejoice to give government to the vile, paying high honours even where they hate. Warped are the rewards of uprightness sad virtue gains; wretched poverty dogs the pure, and the adulterer, strong in wickedness, reigns supreme. O decency, honour, how empty and how false!”

The Death of Theseus

All these misfortunes caused Theseus to turn sour and tyrannical and he soon lost favour from the Athenians. Eventually, they banished him to the Isle of Scyros where the King Lycomedes threw him from a cliff. The Athenians repented and brought his bones back to Athens where they buried him atop the Acropolis.