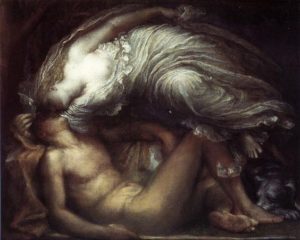 The Myth of the Shepherd-Prince

In Greek mythology, which was an extensive part of Romantic-era education, Endymion was an Aeolian shepherd-prince who dwelled in Olympia, loved by the Titan moon-goddess Selene. Selene was so enamored with the mortal that she pleaded to Zeus to make him immortal, so that he could remain with her for all eternity. When Zeus offered Endymion a choice of destinies, he chose immortality and so Zeus put the shepherd in eternal slumber. Endymion was placed in a cave on Mount Latmus in Karia (Caria) where his lunar lover Selene would visit him every night.

The Eleian myths concerning King Endymion belong to the Greek tradition. The tales of the sleeping shepherd-prince of Mount Latmos in Anatolia however, were evidently a Greek translation of stories regarding Karian moon-god men, and as the Greek moon-deity was female, the tale was partially altered.

The subject of the tale of Endymion has undergone change over time, however it was on this version that John Keats based his 1818 poem, Endymion. The poem expands on the original myth and renames Selene “Cynthia”, which is an alternative name for Artemis.

Endymion, Book 1 – A Thing of Beauty is a Joy Forever

A THING of beauty is a joy for ever:
Its loveliness increases; it will never
Pass into nothingness; but still will keep
A bower quiet for us, and a sleep
Full of sweet dreams, and health, and quiet breathing.
Therefore, on every morrow, are we wreathing
A flowery band to bind us to the earth,
Spite of despondence, of the inhuman dearth
Of noble natures, of the gloomy days,
Of all the unhealthy and o’er-darkened ways
Made for our searching: yes, in spite of all,
Some shape of beauty moves away the pall
From our dark spirits. Such the sun, the moon,
Trees old and young, sprouting a shady boon
For simple sheep; and such are daffodils
With the green world they live in; and clear rills
That for themselves a cooling covert make
’Gainst the hot season; the mid forest brake,
Rich with a sprinkling of fair musk-rose blooms:
And such too is the grandeur of the dooms
We have imagined for the mighty dead;
All lovely tales that we have heard or read:
An endless fountain of immortal drink,
Pouring unto us from the heaven’s brink.
John Keats
(For the full text please click this link: http://www.bartleby.com/126/32.html) 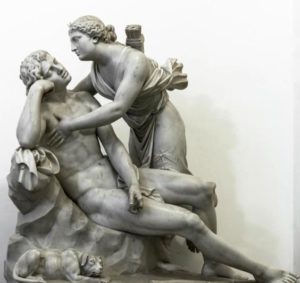 Endymion’s Dream and His Quest for Love

Endymion is a long narrative poem divided in four books. It has been named after its hero, Endymion, a character taken from Greek mythology. In Endymion, John Keats takes the legend of a shepherd who fell asleep on Mount Latmos and captivated the goddess of the moon, Cynthia, who fell in love with him. He transforms this basic tale into a somewhat wearisome and difficult quest in which Endymion hopelessly searches for a beautiful and mysterious goddess he first glimpsed in a dream.

Book I describes Endymion’s account of his dreams and adventures, as narrated to Peona. The poem first begins by illustrating the pastoral world of Endymion and his people, with shepherds gathered around an altar to worship Pan, god of shepherds and flocks. While the youths are in a festive mood, and the elders sit and discuss what life would be like in the shades of Elysium, Endymion, the “brain-sick shepherd-prince” of Mount Latmos, appears to be in a state of depression; troubled by his trance-like state, his sister Peona, leads him away to her place of rest in order to determine the reason of his agony. Endymion tells her how in a dream he met and fell deeply in love with the manifestation of feminine perfection but when he awoke, he found himself alone and heartbroken in a world he now saw as hideous. Peona advises her brother not to destroy his life obsessing over a mere dream, to which Endymion replies that “love immortal” is far more valuable than earthly greatness. He also reveals that he had since seen the image of his dream-lover in a well and has heard her voice emanating from a cave. However, the book ends with Endymion declaring to Peona that he is reconciled to a life of unrequited love.

In Book II, Endymion begins the quest for his dream vision, journeying into the Underworld in pursuit of his love. He encounters a naiad who instructs him that he “must wander far/ In other regions” before his love can be accomplished. Endymion is discouraged, but a voice inspires him to descend, and Endymion continues his journey until he comes upon the Garden of Adonis, where Adonis, the favourite of Venus, is asleep. Venus appears as Adonis begins to awaken from his “winter-sleep” and requests Love to pity Endymion’s agony. This encounter seemingly foretells an identical fate for the mortal Endymion and his immortal paramour.

Book III describes Endymion’s enduring love, and he pleads to the Moon not to torture him anymore while he travels through a watery emptiness on the seafloor. There he encounters Glaucus and liberates the god from a thousand years of imprisonment by the sorceress Circe.

In Book IV, Endymion becomes enamored with an exquisite Indian maiden “And so he groan’d, as one by beauty slain”. The pair ride to Mount Olympus on black-winged steeds where Cynthia waits with anticipation, and there Endymion renounces the goddess for his new mortal love. On their return to earth, the Indian maiden declares that she cannot be Endymion’s love, which causes him to become miserable. However, quite unexpectedly, he encounters the Indian maiden anew, and she unveils herself as Cynthia, who expresses how she struggled to forget him and continue with her existence, but in the end “There is not one/ No, no, not one/ But thee”.

The Three Sources of Happiness

In his narration to Peona about his dream-lover, Endymion deviated and told his sister that there are different stages of happiness, from the simplest form to the highest. Peona asks her brother why he would chase love instead of fame, and he responded that there are three sources of happiness. The first is sensual pleasure, which emanates from personal experience with nature, for instance, hearing the music the wind make with an Aeolian harp. The second is the pleasure that derives from art, particularly from the retelling of old heroic tales. The third is the highest source of happiness: relationships. Endymion spoke of the happiness of human “entanglements”, those which allow humans to grow beyond the self and the restrictions of a single existence. Endymion concluded that friendship is indeed a “steady splendor”, yet love is exalted, it is a “radiance” where two souls “interknit”. Endymion told his sister that men who would have accomplished deeds of heroism have instead preferred love, discovering in it serenity, because love makes the soul feel its immortality. And so love is more valuable than fame. 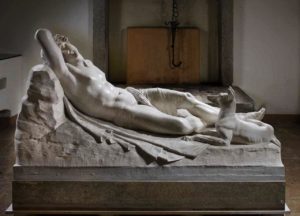 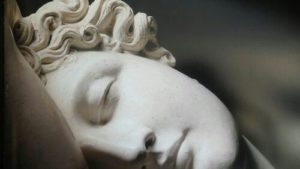 From the book of Endymion as a whole, it is the first stanza, specifically the first line, that evokes the most attention from scholars and critics equally. It begins with the immortalized phrase, “a thing of beauty is a joy forever”, which has since been famous in the English vernacular, and continues to illustrate that without beautiful things, the world is truly a grim and dark place, forlorn and full of despair. Conclusively, it is beauty that allows the world to endure, or it did noticeably for Keats and most of the Romantic poets, such as Wordsworth who was captivated by the idea of divine beauty. “Some shape of beauty”, Keats notes, “moves away the pall/ From our dark spirits”.

Fundamentally, the complete epic is based on the tale of Endymion, whose beauty was of such joy to Selene that it immortalized him for eternity. Similarly, Keats believes the beauty of the world immortalizes itself as it were, and us, to a lesser extent.

By conjuring images of ripe flowers and greenery, Keats draws in the reader of Endymion, possibly without the elegance of his later Odes but nonetheless with such a graceful touch that it is nearly impossible to resist marveling about beauty in the way that he regards it. For Keats, all such beauty, even stories and the “grandeur of the dooms/ we have imagined for the mighty dead” guides towards immortality. Therefore, Endymion is an expression of this, of how captivating things become more beautiful by the passing years, and of how nature and its beauty preserves human happiness and satisfaction on this earth. Life, despite being full of difficulties, supplies us with nature to surrender ourselves to when we need it.

Keats and the ‘Grecian Manner’

While Keats was devising Hyperion, an envisaged long poem about the overthrow of the Titans, he announced to Benjamin Robert Haydon that he would compose in a “naked and Grecian Manner”. Nevertheless, he promptly neglected Hyperion, considering the language too abnormal. He was, however, more successful with his incorporation of Greek mythological figures in his shorter poems, which like most non-Greek readers of his time, he studied from Lempriere’s Classical Dictionary, Tooke’s Pantheon and Spence’s Polymetis. Initially, Keats did this somewhat awkwardly and emotionally, yet his use of Greek myths in his later poems, for instance the great Odes of 1819, are exceptionally flowing and beautiful.

A number of writers and poets, along with Wordsworth and Coleridge, were skeptical of this affection for Greek mythology, observing it as an improper preference for pagan mythology over Christianity. Wordsworth, subsequent to hearing Keats read from Endymion, made a rather dry statement about how it was “a very pretty piece of Paganism”. The other critiques were slightly more brutal, dismissing Keats as uncultivated, someone who could only interpret Greek texts in translation and whose application of myth was arrogant and careless.

What is currently regarded as the most unique aspects of the Romantics’ use of the classical legacy were, back then, frequently disputed and ridiculed.