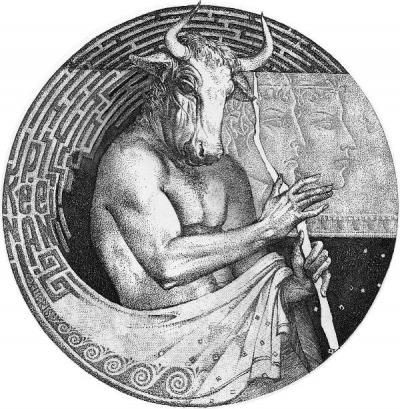 Borges’ Myth of the Cretan Minotaur

The House of Asterion is a short, fantasy story that retells the classical myth of the Cretan Minotaur from an alternate perspective, written by the Argentinian writer Jorge Luis Borges. The House of Asterion presents the Minotaur, known as Asterion, who awaits “redemption” in his labyrinth. There are various literary critics who have proposed that the “Borgesian” labyrinth is a symbol for human existence and the universe itself. Furthermore, other critics have accurately explained Asterion’s ironic demise, by the “hero” Theseus, as his earnestly awaited redemption. Asterion’s redemption is not from the freedom offered through death, yet from a metamorphosis which surpasses his fictional universe. The dual redemption of Asterion is not only caused by the classical hero Theseus, but additionally by the reader, who through the method of reading, permits Asterion’s liberation from the labyrinth.

InThe House of Asterion, Borges is consumed with the idea of the labyrinth, both in its physical and symbolic form, in addition to the concept of man at its core. In his work, dreams are exceptionally presented, as reality itself and as the benefactors of life. Furthermore, he is absorbed with the concept of time and the infinite, disloyalty, violence, treason, punishment and mirrors.

The narrator, who is Asterion, starts by opposing some allegations made against him: such as how he is arrogant, insane and a cynic. Asterion then describes his residence, and explains why he cannot abandon it after what had occurred when he had done so once before. He continues to express how miserable he feels and that he is waiting for his “redeemer” to liberate him from this lonesome existence. The narrator then switches to the third person singular and the voice even shifts to that of Theseus speaking with Ariadne. This is when the reader becomes completely aware that this story is an adaptation of the myth of the Minotaur. The theme of the labyrinth is speckled throughout the text, a house with no doors or furniture, diverging basement hallways, ashen stone galleries, and identical rooms that are also ceaselessly duplicated. This house is Asterion’s universe and the universe is his house. Jorge Luis Borges even touches on the fact that Asterion is a monstrous beast, an extremely lonesome one, as a result of the hysteria experienced by the town’s people during Asterion’s first venture outside of his house.

In the original Minoan myth, the Minotaur is confined in the labyrinth, designed by the inventor Daedalus, and every seven or nine years the “beast” is presented with a tribute of seven maidens and seven young men, so that a plague can be evaded. Even though Asterion opposes it passionately, he is a prisoner of his own isolation as well, his divergence, his condition of monstrous beast. Nine young men are delivered to his house every nine years for Asterion to “free from all evil”, with no explained intention. Contrary to the Minotaur, Asterion accepts Theseus and does not fight against his fate.

For those who would like to read or re-read the classical myth of the Minotaur please click this link.

The story does include one significant characteristic of postmodern fiction, which is the habit to draw the reader’s consideration to his or her own method of interpretation as he or she reads the narration. This ability to enhance the reader’s interpretative understanding is hinted at by literary critics who all illustrate this story as a journey from confusion to affirmation that Asterion, the narrator and central figure, is certainly the Minotaur of legend. The story allows this method of assurance by narrating the classical Cretan myth of the Minotaur but from the Minotaur’s view. For most readers, the point of realisation about the narrator’s identity arrives at the end of the story where Theseus comments to Ariadne that “the Minotaur scarcely defended itself”. Through a stylistic analysis of the narration, one can observe that the central figure is not just proved as a common archetype, yet exalted to a superior realm that can solely be recognised by the reader. 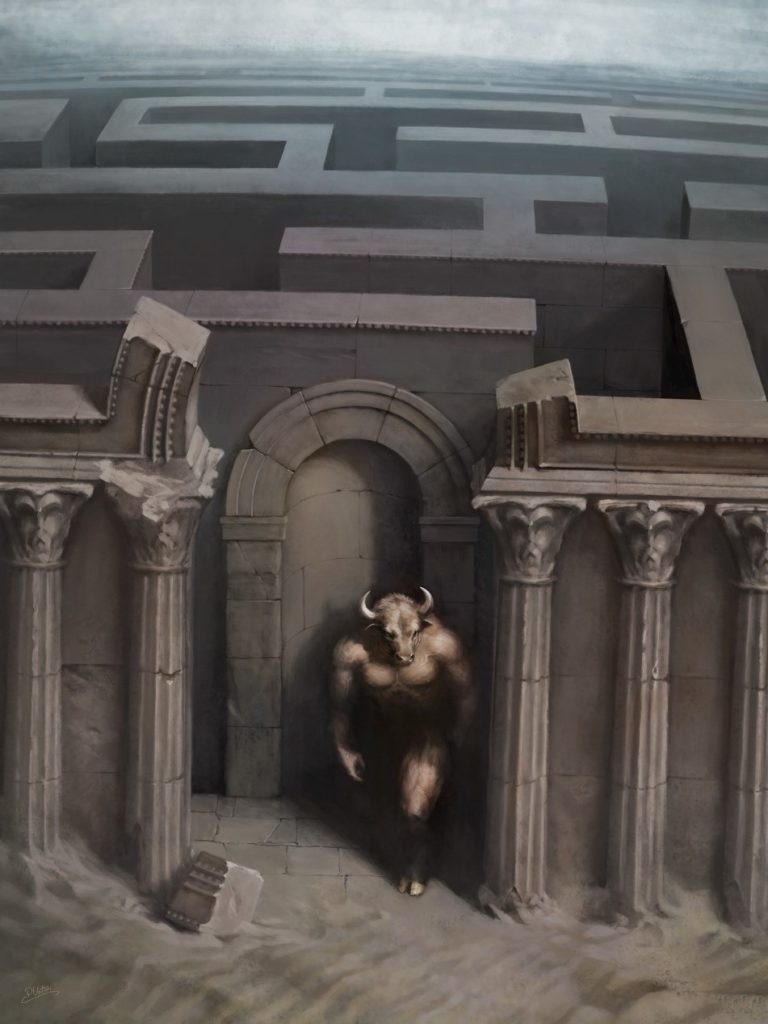 The House of Asterion is set in the Cretan labyrinth, which is illustrated in various works throughout history. From the second century AD to eighteenth century, adopted by Christians and Renaissance poets alike, the labyrinth held a significant symbol for many. In the eighteenth century the labyrinth had become a philosophical metaphor of the finite and the infinite, with the heart of the labyrinth depicting the unachievable meaning of the universe. This idea became more complex moving into the twentieth century, which is known as the “age of labyrinths”, as a result of the domination of labyrinths in literature at the time.

Borges’ work presents labyrinths as a typical concept and it is frequently concerned with the diverse literary definitions which labyrinths have gained over the ages. The core of the Borgesian labyrinth has been understood as the core of human existence, or the core of the universe, and essentially all of Borges’ characters aim to encounter a moment of enlightenment at this core. In conjunction with existential concepts, the labyrinth has even a religious meaning. In certain ancient civilisations the labyrinth was at times a place for “actions of divinity”, in addition to rebirth.

In the House of Asterion, Asterion regards his labyrinth as a religious place, he recounts how “every nine years, nine men come into the house so that I can free them of all evil”. This deed of divine redemption can be a euphemism for “killing” and certainly, Asterion might not realise that his alleged “god-like powers” do not in fact exist. Regardless, Asterion discovers purpose in his fairly purposeless existence. This alternate outlook destroys the “classic” forms of the narrative, which in spite of their several deviations with particular details, contribute a typical aspect, that of rejecting the Minotaur’s purpose.

During the whole of history, the Minotaur has been depicted as either the manifestation of terror, the ramification of monstrosity, or the counter-character of Theseus. In George Frederick Watt’s painting, The Minotaur (1885), the lonesome creature is gazing out to sea when a bird crumbles under his hand. He appears to be awaiting the arrival of someone, and an appearance of melancholy in his posture conveys that he is as dismal as he is bestial. This painting influenced Borges, who suggests an identical uncertainty in his adaptation. Thus, Asterion tests and enhances the classical myth. 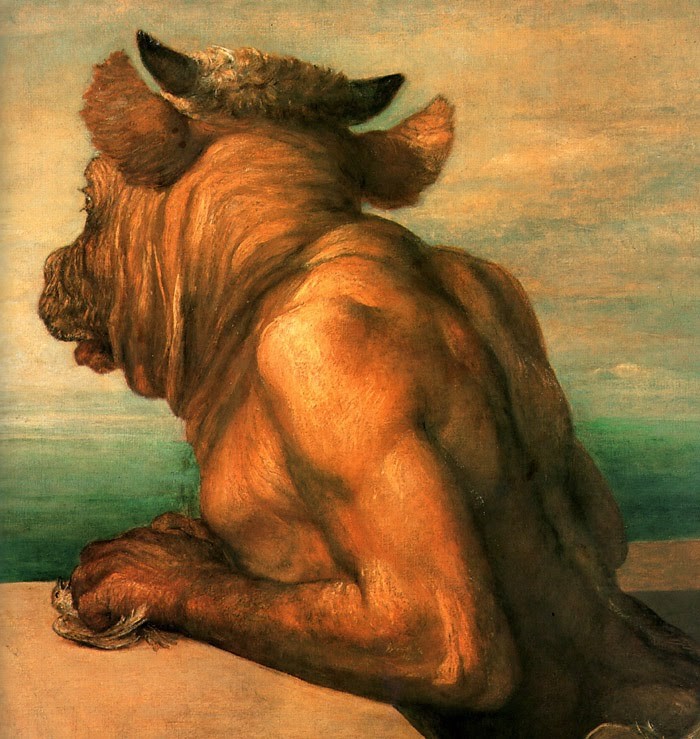 There are numerous variations regarding the myth of the Minotaur, however each version is mainly a retelling of the same myth with a concentration on the progression of events instead of the character’s evolution. Nevertheless Borges’ story is different, because it is an interpretation of the myth from the Minotaur’s own perspective. Asterion is locked up in his house with no obvious explanation as to why and lives there on his own, spending the majority of his time pretending, and interacting with his imaginary friend – which is a projection of himself. It is unfortunate that his only experiences with true interaction, is with the doomed youths to be sacrificed. From Asterion’s narrative it is obscure whether the sacrificed are actually murdered or not, yet there are implications that he commits this deed with the belief that murdering the youths is a morally respectable act. This could be a result of Asterion’s conviction that he is assuredly the one to free these people from evil.

Subsequently in Borges’ adaptation, amid a human sacrificial ceremony, a dying man foretells that Asterion’s “redeemer” will come, albeit the demand of redemption is never clarified, Asterion is consumed with the idea of his “saviour”. The irony of Asterion’s redemption is because it is through death, murdered by the “hero” Theseus and he is in this manner “redeemed” from his imprisonment. These occurrences are all narrated by Asterion in the first person, thus Borges’ overturns the legend, reinventing the Minotaur, and formerly immersing him once more into the mythical canon. Hence establishing the labyrinth as a site of transformation and rebirth.

Asterion’s obsessive faith in his “redeemer” is strengthened by the particular design of the text. In a desperately desolate world, essentially devoid of human interaction it is not unforeseen that Asterion vigorously hunts for meaning in his macabre contact with people. Furthermore it is no wonder that Asterion implicitly believes an outsider who foretells the arrival of a “redeemer”. Those words are arguably the only words ever uttered by an actual person to Asterion. The linguistic choice implies that for Asterion, loneliness and the loss of human life are not as significant as the advent of his “hero”. He awaits “redemption”, in whatever form, counting down days and years, and possibly even feeling let-down when those audible footsteps are nothing more than sacrificial youths.

In accordance with the classical myth, Theseus enters the labyrinth with a crowd of sacrificial contributions and slaughters the Minotaur. Amid the Renaissance period, this achievement was exalted as a heroic victory of good over evil, however in Borges’ narrative the achievement appears trivial and empty, being that Asterion embraces his ironic fate without resistance. In the story, Asterion declares how he takes pleasure in pretending to be hunted, even heaving himself off rooftops. Conceivably Asterion knows the horrible reality of his existence and undertakes self-destructive actions while he waits for the ultimate redemption of death. He believes that the reason for his imprisonment in the labyrinth is because of his royal lineage and how that forbids him from interacting with commoners. Could this be another of Asterion’s misbeliefs, or is he conscious of his abominable nature and merely prefers not to confront it? 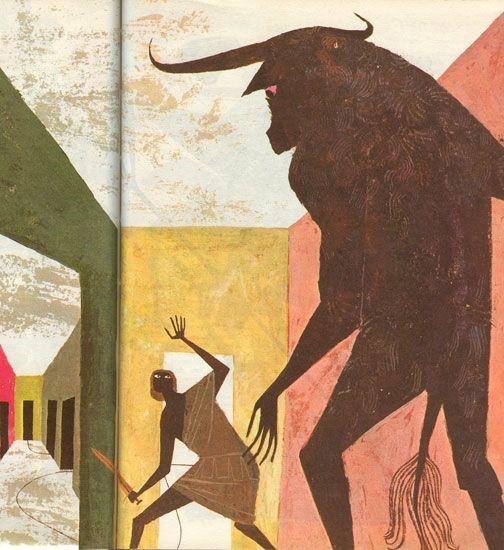 Freedom from a Nightmarish Existence

The House of Asterion allows the reader to connect personally with Asterion’s psyche and experience the world through consciousness. The classical myth narrates how the Minotaur was condemned to the dark and dreadful labyrinth because of his beastly description. Asterion assures himself that he is not a prisoner, but a godly being of sorts who is capable of absolving evil, and in his forlorn attempt to discover meaning, he cultivates a blind faith in “redemption”. His fate then unravels into two independent levels of reality, the Minotaur is liberated from the labyrinth of his existence through death. Furthermore, ironically Asterion’s “redeemer” is none other than Theseus, whose conventional heroic role is overturned when he slaughters a vulnerable and pitiful creature. The moment of discovery is pronounced by an immediate switch to an all-knowing third person narration: The morning sun shimmered on the bronze sword. Now there was not a trace of blood left on it. 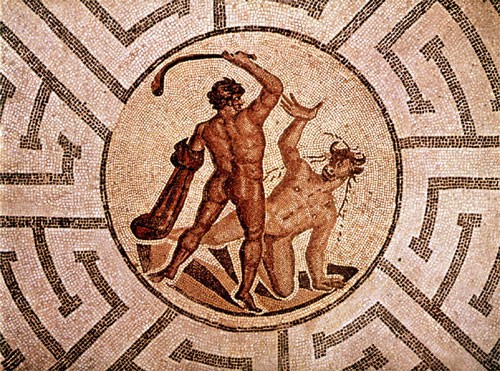 Through Borges’ narration, Asterion is transformed in the reader’s mind as a conscious individual that endures the same anguish, the same solitude, and the same confusions as any other person. At that final moment in the story, when the impossible is ultimately possible, the Minotaur dies and is reborn as Asterion, an aristocratic son doomed to a life of misery. In the mind of the reader, Asterion is liberated from the labyrinth of his conventional fictional world and from his archetypal role of a monster in classical mythology. The godlike redeemer whose visible appearance Asterion can only conceive, is literally the reader of the story, who by the means of reading, completes the magical rite of metamorphosis and the abominable beast into a symbol of the human condition. The story concludes with a line from Theseus – “Would you believe it, Ariadne? The Minotaur scarcely defended himself.” — Which ultimately confirms to the reader that Asterion is undoubtedly the Cretan Minotaur. 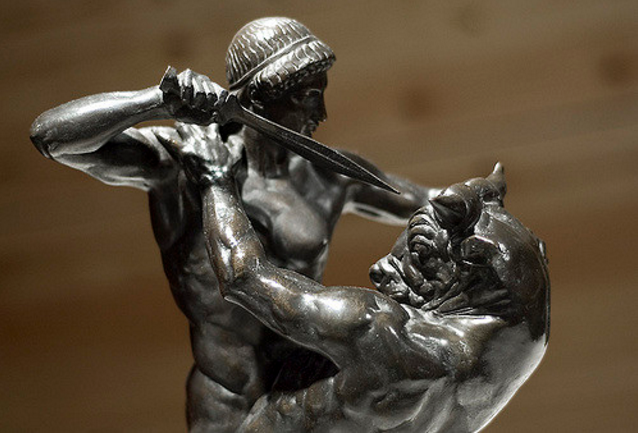 The MCA give its thanks to Blossom Holland for this interesting literary appreciation. Stay posted for more on our blog.