Acrisius, the King of Argos, heard from the Oracle of Delphi that a son born from his daughter was destined to kill him. Struck by fear Acrisius locked his daughter, Danae, in a tower and threw away the key. Zeus appeared to Danae in the form of a golden shower and nine months later Perseus was born. When Acrisius discovered Danae and her child, he did not want to murder them outright lest he incur the wrath of the Gods, so instead, he locked Danae and Perseus in a chest and set them afloat in the sea, hoping nature would take its course and do his job for him. However, this plan failed and Perseus and his mother floated to the island of Seriphos, where they were rescued by the fisherman Dictys. 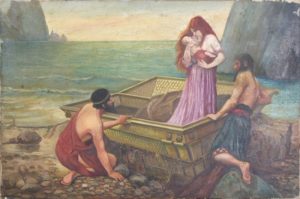 When Perseus had grown into a strong young man, Dictys’ brother, who was also the King of Seriphos, Polydectus fell in love with Danae. He wanted to marry her but he did not like Perseus, so he set in motion a plan to get rid of him, without having to kill him himself and risk the wrath and scorn of his future bride. Polydectes invited Perseus to a celebration, where everyone except Perseus had given Polydectes a gift. Perseus, embarrassed and slightly frightened offered the King any gift he wished for and Polydectes rejoiced at the opportunity to get rid of Perseus. You’ll never guess what he asked for!

Did you guess? Polydectes asked for the head of Medusa because that’s not at all creepy or gross. However, Perseus, not wanting to back out of his word, set out on his journey. He arrived at a crossroads and realized that he had no idea where he was going, how to kill Medusa, or how to return home without getting killed by Medusa’s sisters. Perseus needn’t have despaired because right then the God Hermes and the Goddess Athena appeared hoping to aid their half-brother. Athena gave him her bronze shield, so that he would be able to approach Medusa without facing her gaze, which was so terrifying that it could turn people into stone. Hermes gave him a pair of winged sandals and the scythe that Cronus used to liberate certain appendages from his father.

They gave him instructions to go to the Graeae, who could tell him where the Gorgons lair was, and Perseus obeyed. The Graeae were three old women, that shared one eye and one tooth between them, Perseus stole the eye while they were passing it to each other and forced the location out of them in exchange for returning their eye. They also informed him that if he journeyed to the Nymphs of the North they would give him the Helm of Darkness and a bag to carry his war trophy in. 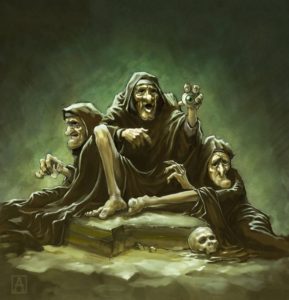 So Perseus obeyed and when he arrived at the Gorgons lair he cut off Medusa’s head and using his gifts flew away invisibly, successfully completing his task. Some blood dripped from the bag containing Medusa’s head. One fell into the ocean and the majestic Pegasus was born, another fell on the earth and a mighty giant was born.

On his journey back to Seriphos, he came across a beautiful young woman chained to a rock ledge. He asked the lady what was wrong and she replied, telling him her story. She was Andromeda, Princess of Aethiopia, her mother had insulted the naiads by saying that she was more beautiful than they were. The naiads were severely insulted and asked Poseidon to send a giant sea monster to attack the land. The naiads told Cassiopeia, Andromeda’s mother, that unless the monster devoured her daughter he would not be satisfied.

Perseus was outraged and when the monster surface he attacked it with his sickle, slaying the mighty beast and freeing Andromeda.  After saving her she married Perseus and journeyed with him back to Seriphos. 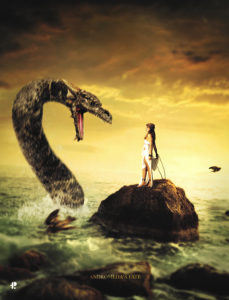 When he arrived, he found that his mother and Dictys had been forced into hiding, because the King had pursued his mother and she had spurned his advances but he kept trying to force her. Perseus was furious at the King for the way he treated his mother and rescuer so he set off to the King’s court.

At his arrival, King Polydectes, rose from his seat in shock and exclaimed his disbelief. Perseus told him that he had indeed brought the requested gift. He held up Medusa’s head, shutting his eyes firmly, and turned all the courtiers and the King to stone. Dictys ascended to the throne and Perseus lived happily with Andromeda and his mother at his side in Argos.

In the beginning, we heard about a Delphic prophecy that said Perseus would kill his grandfather. This indeed came true. Years after the return to Argos, Perseus attended some funeral games in Larissa, where he threw a discuss with all his might, however, it veered off course and hit King Acrisius on the spot. This just goes to show that there is no escaping fate and that even mighty heroes have moments of clumsiness.

Many, many years later Perseus died of old age and the gods preserved him forever in the stars next to Andromeda. 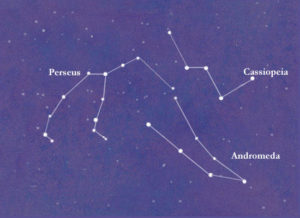