If you were an ancient Greek suffering from a bout of insomnia, Hypnos is the god you would appeal to. Commonly believed to dwell in the cave at the source of the river Lethe (Forgetfulness) in the underworld, Hypnos is the god who presides over sleep. He shared the cave entrance, which was said to be protected by vast amounts of poppies and other sleep-inducing plants, with his brother, Thanatos (Death). The god himself was also sometimes shown with wings on his head and carrying a branch dripping with water from the Lethe.

Hypnos would have been an important deity, for he had domain over half the lives of men, and was so powerful that he was able to put mighty Zeus himself to sleep, not once but twice! 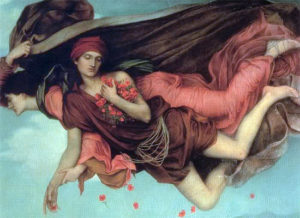 Hypnos is mentioned in the Argonautica for his role in aiding Jason to retrieve the Golden Fleece when Medea calls upon him to help her put the dragon to sleep.

“And as he writhed, the maiden came before his eyes, with sweet voice calling to her aid sleep, highest of gods, to charm the monster; and she cried to the queen of the underworld, the night-wanderer, to be propitious to her enterprise.”

The first time Hypnos put Zeus to sleep was at Hera’s request. She was angered that Zeus’ son Heracles had sacked the Trojan city and so she set about plotting her revenge. Hera was aware that Zeus would never allow her to punish his son and so, with the help of Hypnos, he was taken out of the picture so that Hera could release a terrible storm upon Heracles. When Zeus awoke he was obviously extremely angry and he went on a rampage seeking Hypnos so that he might kill him. Hypnos succeeded in saving his own life only because he hid with his mother – Nyx (Night) – who was such a powerful being that even Zeus would not dare anger her or enter her realm.

The second time, Hera was also at fault for Zeus’ unwilling slumber. She wished to aid the Achaeans during the Trojan War, but Zeus would never allow such a thing. So, Hera started plotting again and her plan once more included Hypnos. Hypnos had learned his lesson the first time around and he was very reluctant to repeat his mistake but after Hera coaxed him with the promise of the hand of Pasithea, the youngest of the Graces and goddess of relaxation and meditation, in marriage, he relented. Hera took Zeus off to Mount Ida where she seduced him with the aid of a charm given to her by Aphrodite, and Hypnos used this moment of distraction to force the god into another slumber. Once Zeus was passed out, Hypnos travelled to Poseidon where he explained that Zeus was asleep and that if he so wished Poseidon could attack the Trojans. Poseidon, of course, seized the opportunity and when Zeus awoke he had no idea of what had truly happened to him, leaving Hypnos safe to enjoy his new wife.

His wife bore him sons, the Oneiroi (Dreams), though some sources say they were Hypnos’ brothers. Of the Oneiroi we know three by name: the most popular was Morpheus, often considered the leader of the Oneiroi and Hypnos’ general and he is commonly depicted wearing a crown of poppies. In dreams, he had the ability to mimic any human being in appearance, voice, and manner to perfection and he often delivered prophetic messages from the gods. Phobetor could change into any manner of beast and was often considered more common in nightmares, while Phantasos presented the other elements of dreams as well as the fantastical elements of surreal dreams.

The Oneiroi believed to venture out of their dwellings every night but before entering our world they would have to pass through a gate. There were two gates from which they could pass, one made of ivory and one made of horn. True or prophetic dreams were delivered after the Oneiroi passed through the gate of horn while false or delusive dreams were delivered after they passed through the ivory gate.

Halcyone was a daughter of Aeolus and wife of Ceyx, King of Thessaly. One day Ceyx was obliged to make a journey to a far off Oracle. Halcyone knew well what powers the winds had and feared for her husband’s life. Her worry was not misplaced for one day a terrible storm came upon Ceyx’s ship and he perished along with his crew. Hypnos sent Morpheus, disguised as her husband, through the horned gate to tell her what had happened and that Ceyx’s body would wash up on the shore. When she awoke, Halcyone rushed to the shore only to find that her dream was true. She despaired at the loss of her husband and threw herself into the waves to die with him but the gods took pity on them and changed them both into kingfishers, which nest over water, heralding a short time of peace when Aeolus calms the winds for his daughter to hatch her young. 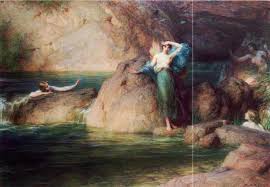