Hephaestus is a unique God in many ways, the first being his appearance. Hephaestus is often thought of as the only Olympian God that did not have great physical beauty. Hephaestus was born of Zeus and Hera (or solely of Hera, sources differ) and he had a tragic limp whose origin is explained in two different stories.

The first story tells of how Hera, being so disgusted by her son’s less than impressive good looks, threw him from Olympus into the ocean, where Thetis and Eurynome rescued him and delivered him to Lemnos. The second story tells of Hephaestus defending his mother when she is arguing with Zeus. The latter is so enraged at his son that he grabs him by the leg and flings him from Olympus, causing his lame leg.

Hephaestus was considered the God of fire, blacksmiths, sculptures, volcanoes, and metal-work. He is accepted back into Olympus after having become a master craftsman on the island of Lemnos (where he was particularly worshiped in ancient times), and appointed the official craftsmen of the gods building countless items for both Gods and mortals. His acceptance is a tale riddled with trickery and intrigue. 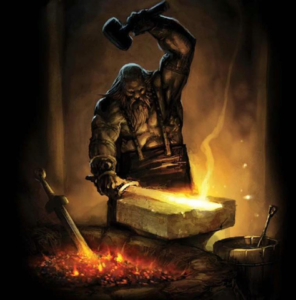 Hephaestus’ rise back to Olympus

It is said that Hephaestus fashioned a beautiful golden throne which he gave to Hera as a ‘gift, however, the second she sat down upon it invisible chains wrapped around her and no matter how much she struggled she couldn’t get free, for Hephaestus had been harbouring a grudge towards her (either from throwing him off Olympus or for not protecting him from Zeus’ ire) and he wanted his revenge. The others rushed to her in an attempt to aid her but soon they realized how wonderfully and cleverly the trap had been crafted and surmised that Hephaestus himself would be the only one capable of disarming it. So Zeus sent Ares, the God of war, to plead for Hephaestus’ help and when that failed spectacularly, Zeus sent Dionysus to get Hephaestus inebriated and cooperative. Surprisingly it worked, and the drunk Hephaestus freed Hera’s binds.

Hephaestus was placed into an arranged marriage with Aphrodite, who disliked his looks and therefore never truly loved her husband. She often had affairs with Gods and mortals alike. Some suggest that the purpose for this marriage was for Zeus to prevent the other male Gods from fighting over her hand, while others suggest that her hand was offered as a bride for Hephaestus to release Hera.

One of the aforementioned affairs regularly took place with Ares, which Helios saw and reported to Hephaestus, so the smithy determinedly set up a trap made up of an inescapable golden net with a plan to humiliate the both of them. When the two were in a compromising position, Hephaestus let loose the net and hauled the two of them in front of the other gods who laughed at the naked humiliation of Aphrodite and Ares alike. 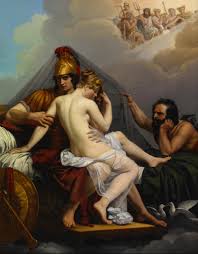 The creations of Hephaestus

Hephaestus spent a lot of time in his workshop which was said to be found beneath Mount Etna, he had two automatons which he made out of gold to help him compensate for his lameness. Many grand items emerged from this workshop like the thrones and weapons of the Gods, including Zeus’ thunderbolts, which he produced with the help of the Cyclopes, and Athena’s shield, Aegis. He also produced such creations like the chariots of Helios and other gods, and Hermes’ helmet and sandals. Hephaestus is also sometimes seen as the one bearing the golden axe which split Zeus’ skull, resulting in the birth of Athena. It was with Athena that he worked in order to creat Pandora, on Zeus’ orders, so that she could serve as punishment for theft of fire from the Gods by Prometheus.

The Necklace of Harmonia

Among his many creations, one can find the necklace of Harmonia. Hephaestus had been so enraged by Aphrodite’s infidelity that he cursed any children born of the union, in this case, it was a girl named Harmonia and he used the necklace to bring his curse to fruition. The necklace did not bring any harm to Harmonia but her daughter, Semele, was wearing it when Hera challenged Zeus’ identity, which led to her death after he revealed his true form to her.

Queen Iocasta also owned the necklace and it allowed her to remain young and beautiful, and eventually marry her own son, Oedipus, which turned out quite horribly for everyone involved since she committed suicide and he gouged out his own eyes. The necklace passed down through the generations, leaving tragedy in its wake until finally Amphoterus and Acarnan gave the Necklace as an offering in the Temple of Athena at Delphi. The necklace was eventually seized by a tyrant, Phayllus, who then offered it to his mistress whose son went mad and set the house aflame.