The feeling we get when we look up on a clear night to a sky full of stars, is one which is hard to describe. Somewhere between wonder and awe, and that feeling has existed for a thousand years. Like us, when the ancient Greeks looked up they felt the same things and they created a story to explain the origin of the various shapes we see in the skies above us. There are many cultures which have different explanations for what we know of today as constellations, and here you can find a small number of the Greek versions.

The first constellation relates to a Greek myth that everyone has probably heard.The Hercules Myth of The Twelve Labours helps explain the origin of four constellations. These are Hercules, Hydra, Cancer and Leo. In the previous link you can read about these in greater detail, the abridged version is; Hercules, a great mythical hero, slays The Nemean Lion (Leo), The Lernean Hydra (Hydra) and Karkinos (Cancer) during two of his twelve labours. 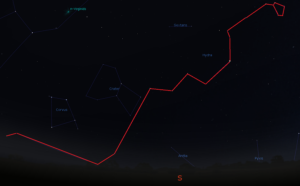 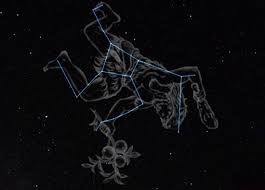 Another Greek myth that explains several constellations is the myth of Perseus. Perseus was also a great hero of myth, as it was he who cut off Medusa’s head, from whose blood the beautiful Pegasus was born. He also rescued Andromeda from a great sea monster (Cetus). Andromeda’s parents also have their place in the skies, as the constellations Cepheus and Cassiopeia. For a deeper retelling of Perseus’ story, you can check out this post 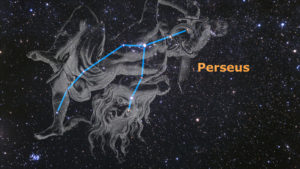 Next, we can talk about a very recognizable pattern of stars, especially in the winter months, Orion. You might not have paid attention to all the stars in the constellation but we’ve all seen those three beautifully aligned stars that make up his belt. Orion was said to be a giant and among the most handsome of men. He was the son of Poseidon and Euryale, a princess of Crete. It was said that he could walk on water thanks to his relation to his divine father and he was a very skilled hunter. 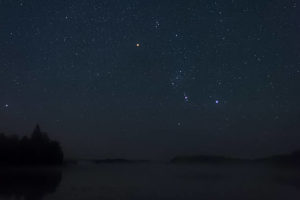 Orion once took a liking to Meriope, one of the Pleiades (a star- cluster in the constellation of Taurus) , and while inebriated, he made unwanted advances towards her. According to one version of the myth, Zeus put her and her sisters in the skies for their own protection. As punishment for the insult to his daughter, King Oenopion blinded Orion and banished him. Orion asked the Oracle and Hephaestus for help recovering his sight. In accordance with their advice, he traveled to the East where the sun rises and Helios restored his sight. 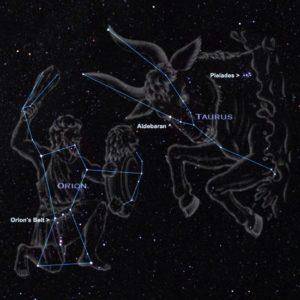 He later joined the huntress, Artemis, with his two faithful dogs (Canis Maior and Canis Minor) at his side. During his travels with Artemis he hunted the Rabbit (Lepus), the Bull (Taurus) and the Scorpion (Scorpio). The Scorpion is said to have been the death of Orion in certain versions of the myth. Another version tells a tale of fondness between Orion and Artemis. Apollo (Artemis’ twin), is angered by this and he tricks Artemis into shooting Orion from a great distance while he was swimming.

There are, of course, other shapes and stars in the sky but today we mentioned a few of the more popular ones. How many of these constellations can you spot in the night sky?