Godly interference, heroes, and monsters are three things, among others, that are extremely common in Ancient Greek and Roman mythos. Here are five of the most terrifying;

One cannot make a list of terrifying monsters without including Typhon, who is considered to be the father of monsters. After Zeus usurped the throne from the Titans, Gaea birthed Typhon to kill the Olympians. He had a lower half made entirely of coiled serpents, his wings could blot out the sun, and his eyes and mouth could spit fire. When the Olympians saw him, they ran away to Egypt disguised as various animals. Athena shamed Zeus, calling him a coward and Zeus, not one to suffer insults kindly, attacked Typhon with his lightning bolts and eventually killed him by dropping Mount Etna on him. To this day, Etna still erupts with the fire of Typhon’s rage. 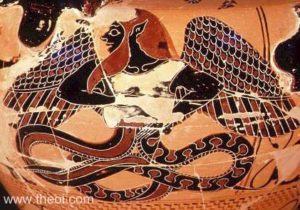 This is the Chimera, as described in Hesiod’s Theogony;

Chimaera who breathed raging fire, a creature fearful, great, swift-footed and strong, who had three heads, one of a grim-eyed lion; in her hinderpart, a dragon; and in her middle, a goat, breathing forth a fearful blast of blazing fire.

It was a creature born of Typhon and Echidna, father and mother of monsters, and it was itself the mother of the Nemean lion and the Sphinx, bested by Heracles and Oedipus respectively.

Bellerophon was sent by King Iobates of Lycia on a mission to kill the Chimera, a mission which the king hoped would prove fatal to Bellerophon. However, with the help of Athena (or Poseidon according to other sources), Bellerophon acquired Pegasus, the winged horse, and rode him in his battle with the Chimera. In spite of the advantage riding Pegasus through the air gave him, Bellerophon still couldn;t manage to kill the Chimera, until the immense heat which radiated from its monstrous mouth gave him an idea. He attached a block of lead to the end of a spear and stabbed at its giant maw. The lead melted and slid down the Chimera’s throat, suffocating the beast and allowing Bellerophon to return to Lycia victorious. 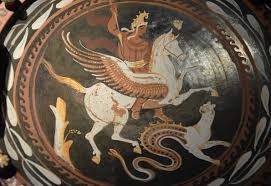 Harpies are monsters with the head and body of a woman and the wings and claws of a bird of prey. They are ravenous monsters who either eat or ruin any food placed in front of the people they haunt, so you can kiss your midnight snacks goodbye. They were said to personify the evil and destructive forces of the winds and were also the creatures who would carry souls off to Tartarus to be punished by the Erinyes.

During Jason’s travels in the Argonautica, he came across King Phineus of Thrace. The King had been blinded by Zeus for revealing the plans of the Gods and punished further by the presence of the harpies. When Jason came to Phineus asking for help on how to find the Golden Fleece, Phineus promised to help, if Jason and his crew could rid Phineus of the harpies. The winged sons of Boreas, god of the wind, took flight and chased the harpies away, refraining from killing them because Iris, Hera’s messenger, interfered. She promised that if they allowed the Harpies to live the creatures would remain on the Strophades islands and never again pursue Phineus. Having completed their task of banishing the monsters, Jason and his crew continued on their merry way towards the Bosphorus, which they could now navigate through safely because of Phineus’ aid.

The Sphinx was a monster born of the Chimera and Orthrus, a two-headed dog. It had the body of a lion, the wings of an eagle, a serpent for a tail, and a human head. The Sphinx stood in front of the gates of Thebes, asking anyone who wanted to enter or depart the city a riddle. If they answered incorrectly they would be devoured. The people of Thebes lived in terrible fear of this beast and the people of the city decreed that whoever could slay it would be given the throne and the Queen’s hand. Oedipus, who was dejected because of a prophecy which promised him a horrible future, decided he would attempt to slay the Sphinx. He approached and it presented him with the following riddle;

What is the creature that walks on four legs in the morning, two legs at noon and three in the evening?

Oedipus answered correctly, stating that it was man, for when he is a toddler he is too weak to stand, and creeps on hands and knees, but when at his prime he walks erect, and in old age walks with the aid of a cane. The Sphinx, distraught by this, threw herself from the precipice on which she stood, making Oedipus victorious and helping fulfill the terrible prophecy he had received. 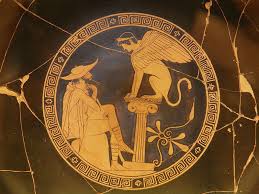 Lamia was a beautiful Queen who ruled over Libya and one of Zeus’ many lovers. As the tales usually go, Hera discovered her husband’s adulterous exploits and set to punishing the poor woman he had courted. As a punishment, she stole away or killed all of Lamia’s children except one, Scylla. Driven mad with grief, Lamia began hunting and devouring the children of others. She is described as having been one of the most beautiful women, but after tragedy struck (in the shape of Hera’s wrath), she is commonly depicted as having the lower half of a serpent and the upper body of a woman who had gouged out her own eyes.

How this came to be is unsure, some sources say her vile actions caused it, while others say it was further punishment from Hera, and others still, say that Zeus turned her into this monster so that she could exact her revenge. This tale was probably a bedtime story that mothers told their children so that they would behave. Accordingly, some would say that Lamia was the classical version of the Bogeyman.